In a world of economic crisis, the health sector has never been so alluring for investors that are striving to develop innovative solutions that respond to challenges such as ageing, less-evasive diagnosis and treatments and reduction of costs.

Whether being at home or in the hospital, monitoring of vital signals of any individual or patient allows for a better accompaniment of their clinical condition and a more efficient (and less timely) response to their needs. With this concept in mind, which one may find it rather simple, Increase Time, a Portuguese technology-based startup was born, promising to promote quality in informal health care for the elderly and for people with some degree of dependence by developing innovative solutions based on wireless networks.

Raquel Sousa, one of the four investors that have launched KeepCare, a homecare support solution which actively contributes to improve the quality of life, comfort and safety of the elderly, whether they live by themselves, with their spouses and relatives or in a residential care home, highlights that “One of the reasons why we have developed home solutions was the fact that we wanted to enhance an autonomous lifestyle for the elderly and chronically ill patients. On the other hand, the quality of life, comfort and health care of our relatives are a constant matter of concern and are challenges that we intend to meet.”

The system developed by IncreaseTime and funded by IndexTalent’s business angels allows constant monitoring of the people’s health, providing the relatives with real-time information and, above all, tranquility.

Raquel Sousa believes that telemetrics applied to the health sector is an area of great potential for growth. “It was thanks to IndexTalent funding that we were able to successfully materialize our technology and thus to launch a service that facilitates quick assistance in emergencies through continuous monitoring of individual’s health state and location. With the validation of KeepCare in a real environment and having obtained a very positive feedback from the end-users, the product is ready to enter in the national and international market.”

Changing careers in the creative sector – A bulgarian case study

This article is initially aimed at creative practitioners who are most likely be producers looking to improve their ability to bring their products to market and use appropriate networks effectively.

It is also aimed at stimulating and supporting small creative industries to develop their possibilities to run creative businesses, even if their inclination and skills do not suit the entrpreneurial path.

The aim is to make them self-sufficient and help them on the road to fulfilling their entrepreneurial ambitions. We are trying to navigate and stimulate small businesses in the creative sector by sharing knowledge, expertise and best practice.

“Hello, my name is Svetlana Mutafchieva from Plovdiv, Bulgaria and I’m an interior designer. I also make jewellery and love restoring old furniture.”

She graduated from the University of Architecture, Civil Engineering and Geodesy, in Sofia, in 2009, where she specialized Interior and Design for the Architecture. That has been her profession since then. Her first paid interior project was for a friend of a friend. But it did work well. The client liked the final result and recommended her to another client and so things got started. Since then it’s been some apartment interiors, a coffee bar extravagant interior, some clients wanting only a room or two…

“Small but interesting projects, full of challenges.In most cases it was necessary to design a piece of furniture because there is nothing suitable on the market or it’s just too specific for the given place.”

So she started to design and make furniture. For example a client, who had a very small space available, asked for a small and inconspicuous dining table, enough for two people. The tricky part was that the table should have been able to unfold enough to be comfortable for the entire group of friends and relatives. A tough task! But that’s how she created the table sized 60/90sm, which became 180/180sm unfolded was created. Plenty of room for everybody!

“In an interior project, either native style or just eclectic, it is sometimes necessary to restore some old hardwood furniture, so it can be used again. Time has the ability to hide those beautiful wood colours and patterns. With the proper treatment those pieces of furniture could be turned into marvelous feast for the eye.”

In the following slideshow (Source photos: Svetlana Mutafchieva), you can see some works of Svetlana:

When a hobby becomes a job

In her spare time, between the projects, she loved to make small figurines of polymer clay, which she used for gifts to friends and relatives. With the time, thanks to those people, that hobby has become jewellery making for clients.

All those occupations give her the opportunity to experiment with new techniques and materials, as well as meet new people and just make them happy. She uses her creative skills in a more generalized way to develop her own business and product lines.

Coworking spaces in France – A case study from Paris

Hi Basil, first question for you: how does the idea of creating a coworking space in Paris came up into your mind?

Hi guys ! The idea of creating a coworking space came with the nature of our jobs. We are three independent designers/graphic artists. A coworking place was a way to answer our needs first. The idea came up progressively. Working from home can be an obstacle to the development of our activities. We all had to deal with the same issues: lack of infrastructures, of logistics, small networks etc. Our idea converged with some other people wishes and, more generally, was the reflect of an evolution in the French society.

How could you define your coworking space?

But, beside the economical and practical aspect, the symbolic value is very strong. Our space permits to fight professional isolation and to gather different professional skills by organizing meetings (formal or non-formal). A nice atmosphere allows exchanges.

Moreover, a coworking space allows coworkers to separate work-life aspects of their lives and to channel their stress.

What is really important is the localization of our space ? Well, it is located in a building gathering 80 starts-ups. It is therefore really professional. We also really want to make people coming from different backgrounds meet. The idea to gather complementary skills is really important to us.

Today, do you think that you have successfully achieved your goals?

Studio Singuliers is a very good tool to develop our own activity as designers/graphic artists. It empowered us and we are now able to deal with bigger projects than before. But, like every tool, its technical sophistication must be continuously improved. The creation of the space and its opening is not the end of the story, this actually a whole process, an engagement to bigger projects. Later, we want to let the people who are working here manage the space and continue with several cooperation all around the world. We want to continue thinking about the relationship between human beings and his entourage. We want that our work stay in connection with human, environmental and economical issues.

We are going to introduce two cases of success of two guys who became great entrepreneurs before reaching adulthood. How? Through their knowledge of new technologies.

Luis Ivan Cuende and Pau Garcia-Milà, two early entrepreneurs, which differentiates them only their hometown: Luis de Asturias and Pau in Barcelona.

Two greats mind who were interested in new technologies from an early age and were aware of the need to improve the software we use and apply it to improve existing needs.

The two have a close relationship with the Young Entrepreneurs Association of Valencia (AJEV) and have had the opportunity to meet them personally. Luis Ivan participated in a 2012 Business Excellence Forum AJEV organized and attended by over 200 people and Pau Garcia-Milà in 2010 participated in the Day of the Entrepreneur of the Valencian Community, organized by the Impiva, public entity to promoting business innovation and in which collaborated AJEV.

It all started when Luis Ivan Cuende got his first Smartphone with Android OS with just 12 years. At that age and swam like a fish in water in computer programming to the point of being able to create a free operating system. The previous investment was 50 euros that his parents gave him to buy a couple of domains on the Internet.

Money allocated to create a free operating system called Asturix, and came to the Asturian government will save millions of euros. This is an operating system like Windows or iOS but free faster because it can run on very old and safer computers because no virus, but mostly known for being open and innovative as they were the first to introduce facial recognition even before google.

However, the project was rejected by the Government of Asturias. Today we employ in Colombia, Brazil, USA, Russia and Canada. At 16, he was elected the best European retail “hacker” 18. Now, just turned 18, Luis Ivan Cuende is an entrepreneur with at least three active businesses, plus special advisor to the President of the European Commission Neelie Kroes, the digital dossier. 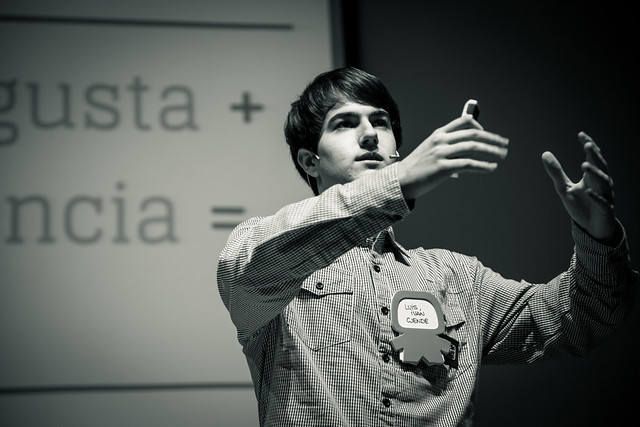 For now, he doesn’t think in the University, and he is currently immersed in a new project: the launch of the first Spanish Bank Bitcoin.

Luis Ivan Cuende stresses that the key to success is to do what you like, focus on what you love and motivates and try to be the best at what you do or try to do my best. “Do not think about whether or not the money is coming, but do what you like”.

An innovation advanced to cloud computing

Pau Garcia-Mila is a passionate about innovation and communication. He is co-founder of three companies: eyeOS (acquired by Telefónica in 2014), Bananity and IdeaFoster.

Since making his first steps into the world of innovation, at age 17 he received important awards such as the Award Innovator of the Year 2011 by MIT (TR-35) or the award of the Prince of Asturias and Girona IMPULSA Company 2010 .

It all started in 2005 when Pau Garcia-Milà and his friend Marc Cercós created an operating system from the web where information could be stored on a site to be accessed from any terminal connected to the internet. This is what we call cloud computing.

“At that time neither had known nor had a name what would invent when. Many said it was stupid” he repeatedly said Pau. Back then, all he wanted was not to have to go up and down the steep slope separating the two friends’ houses to share information. “At that time there were no USB sticks, no iPhones, tablets, the current profusion of internet terminals, one converted desventajada advantage,” stated Garcia-Mila.

As commented, the key is to see that you have 1% of thing and think big: if that was useful to them, someday it would be for most people. At first in eyeOS they were just five people and today millions.

Currently eyeOS has been acquired by Telefónica, which will give new impetus towards internationalization.

Two greats success stories of two young people who stand out not only for their knowledge and involvement with new technologies, but their entrepreneurial attitudes. Caller’s attention for being fighters, self-confident, without fear of failure, with great learning ability and, above all, a positive attitude.

We all have these characteristics, detect just have to know and believe in us. As said Pau Garcia-Milà in an interview “the hard part is not having ideas, how hard is that you do not go unnoticed!”